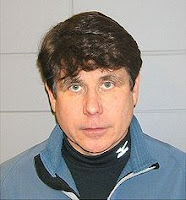 So former governor Rod Blagojevich got 14 years for 18 counts of corruption. At this sentencing hearing today Blagojevich said that he made "terrible mistakes" and told the truth that he broke the law. Even his attorneys said he is guilty of corruption.

So all these years he lied to the people of Illinois - The State Senate - A jury (twice) - and anyone else who inquired? Then after he is convicted he throws himself on the mercy of the court.

Here is an idea. Why not resign - admit what you did up front - take your punishment (most likely wouldn't have been 14 years) and face the music? We live in a world that says, "Why tell the truth when a lie will suffice?" True, we expect people to lie. In fact we're not really surprised, just disappointed. We really do live in a world where people wished everyone else told the truth.

So that you don't think I am picking on the guy, I'm not. He just happens to be the poster guy for lying right now. There will be someone tomorrow, I'm sure of it. All we can do for the former governor and his family is pray for him. Maybe the federal facility that he will be incarcerated has a chaplain and a church? His kids and his wife will have to make some adjustments - to say the least. But if he had told the truth . . .
Current Events