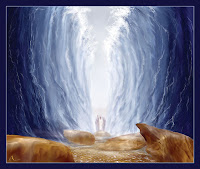 Exodus 14:28 - the entire army of Pharaoh that had followed the Israelites into the sea. Not one of them survived.
THEN END! The Israelites partied like it was 1999 ... BC. Their enemy had been defeated and they were now free people.

One would think that this would be a great place to end the story. But no. Even though the enemy had been defeated - the real enemy of their soul was still there. These slaves didn’t understand God’s plan for them. Not only were they not going to be slaves - they were going to be free. They thought that because Egypt had been defeated that they were. In the physical - yes. But spiritually they were still in bondage to their old ways of thinking.

They were walking through a desert - and with each step they should have been getting closer and closer to God. But all they did was gripe, complain and whine about their situation. They drove Moses nuts! God at one point was ready to wipe them off the face of the earth and start over with Moses. Whoa!

Just because a financial miracle came through for you. Just because your enemy has been defeated. Just because a relationship has been restored. Just because - doesn’t mean that you have changed. The reason why God put the Israelites through this was to help them change. To discover that He was their God and that He was willing and able to take care of their every need. They had relied on masters, idols and slavery so long that they couldn’t imagine a life without it.

So how are you living today? Like a free person in Christ - or are you still thinking like a slave when you were a sinner. Don’t run from your Red Seas - don’t complain to God about the enemy that is trying to destroy you at your Red Sea. Stand still - then when we says so - go for a walk. You will be glad that you did.

PS - Today is Thanksgiving Sunday! Get here by 10:30 a.m. for service. But if you can't make it - try 12 noon and enjoy a GREAT Thanksgiving Dinner for you and your whole family!
Closer to God Elevate