The End of the World, Gadhafi and Earthquakes 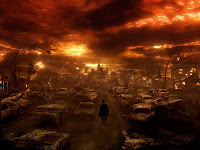 Matthew 24:4 - 8 4 Jesus answered: “Watch out that no one deceives you. 5 For many will come in my name, claiming, ‘I am the Messiah,’ and will deceive many. 6 You will hear of wars and rumors of wars, but see to it that you are not alarmed. Such things must happen, but the end is still to come. 7 Nation will rise against nation, and kingdom against kingdom. There will be famines and earthquakes in various places. 8 All these are the beginning of birth pains.

Earthquakes in Texas and California? Wars in the Middle East? Dictators toppled? What's next?

Fear in how and what happens in our world day to day can and will steal your faith and cause doubt in your mind. The reason is simple. Satan wants to scare the daylights out of you! Fear is a powerful manipulator - but it is a lousy motivator. That's why you need to reread Matt. 24. How does Jesus start his passage?

“Watch out that no one deceives you. 5 For many will come in my name, claiming, ‘I am the Messiah,’ and will deceive many.

Jesus isn't concerned that the world is coming apart at the seams. He is concerned that people are being deceived and led away from the truth - Him. He tells us that these things will happen for a reason. So that we will know that He is coming soon. I do mean soon! Now if you forgot - Harold Camping said that the world was going to end today. That's right - today! So what do you do? Well read on this segment that I copied from todays news.

(Yesterday) Camping himself had little else to say when he answered the door of his home in nearby Alameda, (Calf.) wearing a bathrobe and leaning on a walker. "We're not having a conversation," he said, shaking his head with a chuckle. "There's nothing to report here."

Don't let people deceive you to believe something that isn't in the Bible. Don't assume - ask!
Don't let this world scare you into a hole. Jesus is in control.
Don't force your opinion of how things should be on Jesus. Live your life for Him, not yourself.
Don't let pessimism be the rule of your life. We are the most distrusting, fearful generation ever in history.

Don't worry about the end of the world. God is in control and I've read the last book in the Bible - win in the end!! Somebody say AMEN!!
End of the World

Cheryl Cerrato said…
We should all be saying "AMEN"!!

If we will stay in the word, listen to the voice of our Father in Heaven and keep our trust and faith in him.