The World Will End May 21st 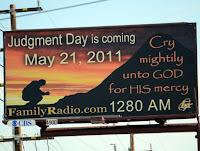 Oh Really!?! Since when?

All of this is according to Harold Camping that is. He runs the Evangelical network Family Radio and is the one who wrote the book 1994? Predicting that Judgement Day would be Sept. 6, 1994. Apparently that question mark is REALLY important.

Now he is declaring that the Rapture (that's when all Christians dead and alive will meet Jesus in the air) will happen on May 21st. Then the end of the world will happen on Oct 21st. Everyone that is left, along with the universe will be annihilated. That means all will cease to exist - no one spends eternity in hell. Oh, and what happened to the 7 years of tribulation? Well that started back in 1988 and has been going on for 23 years. Really!?!

I get annoyed by this stuff for a couple of reasons. This kind of nonsense preys upon the minds and hearts of those who haven't grown in the grace and knowledge of the Lord Jesus Christ. Don't be quick to blame them for believing all of this. With time, as they progress in their relationship with Jesus, they too will come to the point where this kind of stuff will be seen for what it is. Nonsense. I've read Mr. Campings presentation and simply put - it doesn't work. But to manipulate those who are new to the faith to believe in something that isn't even Biblical - just isn't right. Not by a long shot.

Jesus said in Matthew 25: 13 “Therefore keep watch, because you do not know the day or the hour. (NIV84) So according to Jesus, Mr. Camping can't know that the day of the rapture is May 21st. Now some would argue that God just isn't telling, but He left enough clues around for us to figure it out. Oh wake up! If Jesus said that no man would know - then it means that we are not suppose to know!!

Matthew 24:42 - 44 says “Therefore keep watch, because you do not know on what day your Lord will come. 43 But understand this: If the owner of the house had known at what time of night the thief was coming, he would have kept watch and would not have let his house be broken into. 44 So you also must be ready, because the Son of Man will come at an hour when you do not expect him. (NIV84) Jesus is saying that the plan is just live like everyday is going to be the day, and you will have nothing to worry about.

So what do we see some people doing? Going around holding up signs that the end of the world is near is a little cliche. The billboard is a new twist though. People giving up all that they have in anticipation of something based on math - not on the Bible - is a little more than disturbing to me.

But making a mockery of the Gospel of Jesus and desensitizing the public to the real message that there is a day and time when Jesus will return, that a Great Tribulation will happen and that there is a day when all will be judged simply isn't acceptable.

So what can you do? Simply put - be a witness for the truth. If someone asks you about it - say, "Listen, I believe that Jesus is coming back, but I read the Bible and it tells me that no one can know when. While I don't agree with what this guy is saying, I do believe that everyone needs to be prepared for a day when we will stand before God." If they ask you if you are worried about May 21st - tell them no. If Jesus does come back, you go to heaven - if He doesn't come back He is still with you. You win either way. Help them understand that is what it really means to have Jesus in your heart. He isn't a get-out-of-hell free card. He is a live-life-to-the fullest invitation!
End of the World Harold Camping Rapture