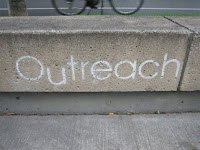 So the idea was to give away newspapers to people going to work last Thursday. No strings attached, we just want to bless them. After an hour of holding signs, jumping up and down, waving newspapers at them, waving at them - all but laying down in the middle of the street to stop traffic (and I don't think that would have worked) We had successfully given away 5 newspapers in one hour.

Hmmm! This isn't working. I thought. Are people that cynical, distrusting and afraid? Apparently so. Nothing is life is free right? Well the newspapers were last Thursday and that wasn't enough. So what were we going to do?

We took our 95 newspapers and loaded them up and started to drive around. We stopped at ever breakfast restaurant in town and first of all looked for a newspaper stand. If there was none then we went inside and asked them if they sold newspapers. The answer was no so we said, "Here, we would like to give you these newspapers for free - seriously." After a few moments of gasping and confusion. They wholehearted, thankfully and cheerfully said YES!!

So a disaster was averted and a new way of reaching our community was found. But it reminds me of the story Jesus told about the wedding feast. When the people wouldn't come that were invited, the master told his servants to go out and find people to attend. We have to go and find them!!
FFWC Outreach