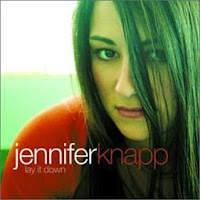 I remember when Ray Boltz came out of the closet. I was on the phone with a friend who was driving through a fast food restaurant. I told him what I had just learned and he super-sized his order. That was a odd response I thought.

So when Jennifer Knapp came out to announce that she is gay, I really wasn't surprised. You can read her interview here at Christianity Today.

Jennifer is another name among a number of musicians and artists I've known over the years who have struggled with homosexuality. Now I am not saying that those who love music are more or less prone to homosexuality, but I have witnessed the attack on this ministry through homosexuality for over 25 years.

Jennifer is quoted as saying, "But if you remove the social problem that homosexuality brings to the church—and the debate as to whether or not it should be called a "struggle," because there are proponents on both sides—you remove the notion that I am living my life with a great deal of joy. It never occurred to me that I was in something that should be labeled as a "struggle." The struggle I've had has been with the church, acknowledging me as a human being, trying to live the spiritual life that I've been called to, in whatever ramshackled, broken, frustrated way that I've always approached my faith."

As one blogger put it, I don't have a problem with the fact that she proclaims to be gay, I have a problem with her living it out and proclaiming to be a Christian while doing it. While Jennifer calls it a "social problem" and a "struggle". The Bible calls it "sin". (Romans 1:26-27; I Corinthians 6:9-10; 1 Timothy 1:9-10)

Now before you start with the nasty comments and emails please read.