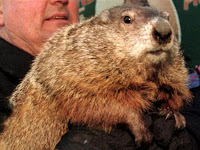 According to Punxsutawney Phil there will be 6 more weeks of winter. As a resident in Florida which qualifies me as an expert in voting, I would like a recount. Maybe we can appropriate some stimulus dollars over to Punxsutawney Phil and relocate him to climate that is sunnier. After all, Punxsutawney PA. is roughly 20% below the national average in sunshine during this time of the year. Surely there someone who has some influence with this rodent and can let him know that for those who are suffering from the psychological disorder called SAD, that is Seasonal Affective Disorder (No I am not making this one up) that a more positive, politically correct announcement may be in order. Instead of saying, 6 MORE WEEKS OF WINTER! Say, BETWEEN NOW AND MARCH 23RD, YOU MAY DESIRE TO VISIT A WARMER CLIMATE! Whatever course of action is taken, I completely reject the prognostication of an animal who lives in a hole in the ground. Just because he wants to hibernate for 6 weeks doesn't mean I have to - does it?
Current Events