What Do You Expect The Holiday Season? 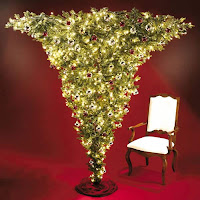 I just posted on facebook the question, "Do you find that the expectations people have about the holidays is being dashed by the realities of a recession?" For years people have been complaining how Christmas has become so commercialized, that it's true meaning was being drowned out by Santa Claus and long lines at Wal-Mart. Others have been saying that it is an insult to their belief system (or lack thereof) and that the word "Christmas" should be banned from their presence. (I don't see them walking around with t-shirts saying, "I don't believe in Christmas.")

However, I think that the recession has had a positive effect on Christmas. No not the retailers who for some reason put all their eggs in this basket every year and expect this holiday season to put them over the top. I mean the real Christmas. The holy holiday that observes the announcement and birth of Jesus, the Son of God - who came to this earth as a baby so He could grow up and set us free from our sins. The disillusionment I see on peoples faces this season is more than usual. The question is on everyones mind, "Why am I doing this?"

This is an opportunity for you to not only say, Merry Christmas with passion and meaning - I believe that there will be those drawn to you because of it. They want you to answer a question for them - "What is the real meaning of Christmas?" So what is your answer going to be and how are you going to show it?
Current Events Devotions