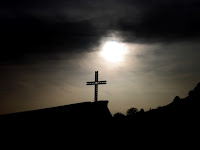 Hope isn't a reward. Some people think that hope is what you get when you get what you want. We feel better when things work out our way. Now I have to be the first to tell you - it feels really good when things go my way. But I have to question my motives when this happens. Are my feelings being justified by my selfishness or by sacrifice?

I can illustrated this by taking you to the Garden of Gethsemane.

Judas betrayed Jesus - He felt justified because at this point he thought that Jesus had betrayed him. Taking control of the situation he got what he could out of it. 30 pieces of silver - Motive? Selfish.

Peter attacked the High Priests servant. - Peter, not realizing that the Kingdom that Jesus spoke of was spiritual not physical, took matters into his own hands when he tried to start a rebellion against the Romans. After all, how was life going to improve for him and his people if someone didn't overthrow the Roman government? - Motive? Selfish.

Jesus went to the cross. - While he did pray in the garden that if there were some other way to do this, he would be all for it - nonetheless, not His desire, but His Fathers will is what should be done. Jesus submitted Himself to be brutally executed. Remember that Jesus was in total control of the situation. The Bible says that He could have called down legions of angels to help Him - but that would have been selfish. Instead, he yielded His right to live and made the ultimate sacrifice. - Motive? Sacrifice.

So the next time you get all bent out of shape because things didn't go the way you planned. Ask yourself this question. Was my motive selfish or sacrificial? Hope isn't selfish.
hope