Where Were You 8 Years Ago Today? 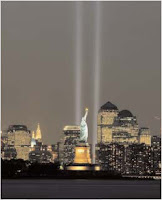 Today is 9/11. It is a day I hope never repeats itself ever again. It was a day that everything in the world collided. Culture, finance, religion, politics, etc. Some of that was for the good - and some if it was bad.

I was standing in the living room getting ready to go to the church office. Betty for some reason was staying behind that day. As I was just about to go out the door I saw the TV and a building was on fire. Hold it! That was one of the twin towers? I sit down and began to listen as the events unfolded. In a few minutes then the second place hit the second tower. I knew then that we were under attack. I knew then that this was going to change my life and the life of every person on the planet now and forever. The tragedy as it unfolded was just one nightmare after another. People jumping out of the building. Towers falling. Planes crashing. The Pentagon was hit too. The nightmare went on and on.

As I drove to church traffic was light. No business was taking place. Life had come to a stop. I looked at businesses and office plazas. People were standing outside talking to each other. Everyone trying to get a handle on the situation. That I knew wasn't going to happen for a while - I suspected that the words. Jihad, Al Qaeda, Muslim Extremists were about to become very important words to us.

I felt sorry for President Bush. As the cameras were rolling an aid comes to his side and tells him the grim news. Without showing any emotion to the children that he was speaking to he quickly finished what he was doing and left. I knew then that regardless of the reasons why we had voted for him God had appointed him to be the President to shoulder this responsibility.

As I went to church the phone was already ringing off the hook. People asking me why, what was going one - etc. But this time the name Osama Bin Laden was being said over and over again. How could anyone think to do something this cruel, this awful, this hideous? It was at that time that I knew we needed to have church that night. We called everyone. News stations ran our announcement on their ticker tape. The church was mostly full of confused and bewildered people. I remember the one statement that I wanted to make very, very clear. "We will not understand the reasoning why what happened this day because we refuse to allow our souls to descend to the depths of this kind of depravity."

The coming weeks and months we as a nation unified to one cause, one rally. The rest is history. But it does lead me to one question that I want to ask you and myself today. "What decision can I make today that will change the rest of my life?" On 9 11 a number of individuals made decisions that changed mine. With the love of Christ, the power of the Holy Spirit and the promises of God within my heart - what can I do today that will change the someone else's life? The answer really isn't as hard as you think.
Devotions Personal Life