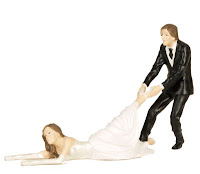 One of the most frustrating things for some married couples is who is going to be in charge. This, coupled with an occasional personality disorder or overbearing need to control is a recipe for disaster. Now on more than one occasion I have asked God, "Why did you put those two together? We you bored and needed some entertainment?" Who is going to be in charge? Here is the right answer. "We are!" Hold it pastor? The Bible says that the wife is to submit to the husband. That is correct. But remember Gen. 2 where it says that the two shall become as one.

No where in Scripture does it say that the husband is the "lord" or "dictator" or the family. It says that he is responsible for the family and as such should be in charge. But when it comes to decision making and leading, he has a help mate! God created woman to be there to man be successful at what he does. Now here is the problem.

If the man has ever done anything to abuse his authority (i.e. an affair, abuse, etc.) then it could be quite some time, if ever, before the wife will trust him again.

If the woman was raised in an environment where she didn't see her father be in charge of his home, she may not know how to let her husband be in charge either.

If the man doesn't do anything with his authority, the woman will have to take charge by default. She may not want to give it back later.

So to put it as simply as possible, the husband is the one who makes the decisions. But if he is wise he will sit down and talk to his wife about those decisions and trust her feelings and judgement in the matter. He will want to make this decision together, but if you have to agree to disagree (that will happen) he has to be able to make a decision. So guys here are a few things you want to do.

If you let your wife make a decision, you may not gripe about it later. It was your decision to let her make the decision.

Make your decisions according to the standards that God has established in His Word. His boundaries will help keep you from making mistakes.

Don't get in a hurry. If you don't feel comfortable in making a decision right now - don't. But don't wait too long.

Trust your wife to help you. Let her speak and let her know that you appreciate everything she does and says. Even if you don't agree with her, thank her for her passion and point of view.
Marriage Series