The Day That Pop Music Died 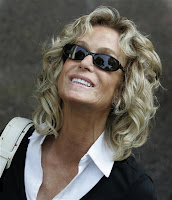 To learn that two of my childhood icons have died is a bit much. Farrah Fawcett will always be a Charlie's Angel to us. (FYI - I am not talking about the movie). Her fight with cancer has been highly publicized so her passing, while sad was not surprising.

But then a few hours later. A heart attack, a trip to the hospital and then the announcement. Michael Jackson is dead at age 50. What a sobering thought. The news hit us so hard that it almost crashed the internet. Years ago, an icon of music, Buddy Holly Ritchie Valens and The Big Bopper (Jiles Perry Richardson, Jr.) died in a plane crash. Don McLean wrote the song about it entitled "American Pie" which included the line, "... the day the music died."

In 1977 (I was 13) I was playing in my Grandmothers front yard with my cousin visiting from California. Someone stuck their head out the front door and yelled. "Elvis is dead!" My cousin and I were wondering what all the fuss was about. Well I learned in a few days that Elvis was a BIG deal - a icon of a generation.

Then today I see it again. Another icon gone. Wow! What one person can do to impact the world. But never did it in the name of Jesus! Don't get me wrong, I'm not criticizing - time for that is over. But if you think that you can't change the world, you never knew Michael Jackson. If you don't think that you can't impact a generation, you never met Farrah. I pray that they left this world knowing Christ as their Savior and Lord. Maybe in the future we will discover an answer. In the mean time, we pray for their families. I am sure there will be funerals and memorial services. But one year from now, who will remember? Some yes - but the name above all names will still be preached, presented, and proclaimed all over the world. He died, but He arose and His name is Jesus.
Current Events