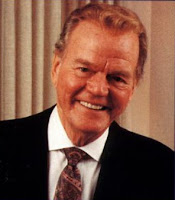 Years ago I was listening to Paul Harvey on the radio. For some of you that's that thing in the middle of your car that you keep shoving CD's into. And no, the stations are not just there for your iPod to play through either. As I was driving down the road, he announced that there had been an accident. A number of youth at a youth ranch were standing on the second floor balcony of their home when it collapsed. I thought some of it until he said that it happened in Little Flock, Arkansas. Hold it! I lived in Little Flock, Arkansas! (It's a suburb of Rogers.) Quickly I made some phone calls, (Hey! What else you going to do? No internet, no email, no texting!!) and sure enough the incident had happened just down the road.

Well from that point on I became a fan of Paul Harvey whenever I could listen to him. What he said made sense, even though he was old enough to be my grandfather, he didn't speak down to me. He stood for something as opposed to a number of people whom I knew stood for nothing. His values seemed to be the same as mine. People first, God and country were important. Sacrifice in life would be needed - but the "Rest of the Story" would always prove it to be worth it.

Paul Harvey died tonight, at the age of 90 after being taken to a hospital in Phoenix, Arizona. He died while surrounded by family and friends. His son, Paul Harvey Jr., said "millions have lost a friend" in response to his father's passing. Yes, we did. With him we lost a voice of reason, common sense and value. He will be missed.
Current Events