Hope and Future - How Church Works - 4 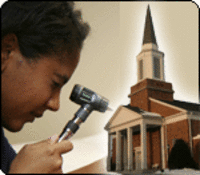 So far we have taken the temperature of the church and determined whether or not that it is exercising. The next part has to do with an old adage some of us remember from the 70's. Part 3 - You are what you eat! What is the church, that's you and me, consuming on a daily basis? Many churches that I have come into contact with are a reflection of their daily lifestyle. While every Christian isn't the same, you can get a determination of what the group does as a whole. I have been in churches whose idea of ministry and discipleship is what happens on Sunday and Wednesday at church. While others not only embrace those opportunities, but they also "fill in" with daily bible reading and devotions. Small groups and other sources which feed their heart. So let's take a look at what we are suppose to be eating.

Who is serving and who is eating? When we go to a restaurant the last thing we want to do is the waiters or waitress job. A few years ago I was at District Council when after the service we all went to a restaurant. Well the staff there had no idea that there were 2,000 hungry people down the street and that we all wanted a late dinner. It was the manager, one waiter and one cook. So after 15 minutes of watching the waiter suffer we got up and walked behind the counter and said, "Listen, you're in trouble and it isn't your fault. We will get the drinks, you concentrate on getting the food orders and cooking them. Nobody in here is going to give you a hard time and we will all wait patiently for our food." The manager said, "Oh, no, no, no!" To which we responded, "You've got a better plan?" He allowed us to get the drinks and everyone thought it was funny that we were helping the kitchen staff. So what's the point?

Some of us have been at the table long enough. It's time to get up and do something instead of sitting there and getting fat all the time. Are there people who need to eat? Yes, there are! As Peter points out some are on milk, like a baby. But some are on the meat of the Word. If all you are doing is sitting there getting fed all the time, but you are not serving others in some way - you're not only robbing yourself of a blessing but you are robbing someone else by being a blessing. Doing ministry is as important as being minister too! The two have never been nor ever will be exclusive of each other.
Faith Family Worship Center FFWC