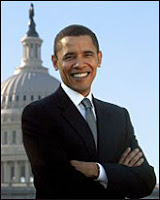 Most of the blogs I read are not even commenting on todays events. There are some who think that it isn't relevant to what they are doing. Others probably just don't know what to say, wondering if what they say will be taken correctly or not. My thoughts are few and hopefully clear.

As we enter the next four years of this presidency I purpose myself to pray for President Obama. It is no secret to anyone when I say that I don't agree with everything he believes in. Nevertheless I will pray for him and this countries future.

I am glad that we have elected an African American president to office.

I was very disappointed with Sen. Feinstein comments to open the inauguration. At a time when the world is watching us, political parasitism sticks it ugly head up.

Not only did Rick Warren pray in Jesus name, just in case no one caught it, he said it in a few languages. I have noticed already that there are those trying to interpret his prayer where he says, "civility over differing" as a call to Christians to be more accepting of homosexuals. In fact, so far no one is complaining about the use of Jesus name.

I do hope that our new president doesn't believe his own press. There are some great victories and defeats ahead of us, wise decisions to be made and mistakes too. No one is prefect, except Jesus - the author and finisher of our faith.
Current Events