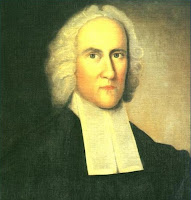 I am enjoying our devotional through John 1. The author makes some excellent observations, some of which I haven't considered before.

In John 1 he talks about being hungry in the Spirit. Something else that struck me too is this. When we are hungry we do something about it. If we are really hungry we tend to announce to the whole world our need. In fact we can get so hungry we will do whatever it takes to overcome the pains of hunger. So if we are willing to do this for our physical body, why don't we do this for our spiritual man?

Mark Batterson wrote on his blog today. "On January 12, 1723, Jonathan Edwards made a solemn dedication of Himself to God. It was one of the defining moments of His life. And I'll share the written vow in a moment.

Few people have left the kind of legacy that Jonathan Edwards did. He is famous for his sermons, including Sinners in the Hands of an Angry God, that helped spark the Great Awakening. He graduated from Yale at 13 as valedictorian. After graduating, he is said to have studied thirteen hours a day. He also served as President of Princeton.

But the thing I find most impressive is that he spent one hour every evening with his eleven children. He prioritized his family and the results speak for themselves. Of his known descendants, more than 300 have become ministers or missionaries; 120 became university professors; over 100 became lawyers; 60 became prominent authors; there are 30 judges, 14 college presidents, 3 members of congress, and 1 vice-president.

How would you like to leave that kind of legacy?

Back to January 12, 1723. Edwards gave himself to God with these words:

I made a solemn dedication of myself to God, and wrote it down; giving up myself, and all that I had to God; to be for the future, in no respect, my own; to act as one that had no right to himself, in any respect. And solemnly vowed, to take God for my whole portion and felicity; looking on nothing else, as any part of my happiness, nor acting as if it were; and his law for the constant rule of my obedience."

The hunger for the Holy Spirit to change us is the beginning of His work in our lives. Our hunger for will precede the actions of God in our live. So how hunger are you?

I'll share with you my thoughts on John 2 later today.
Devotions