In The Name of Jesus We Pray 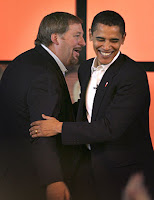 In an article on Yahoo News by the AP Religion Writer, reporting concern among some that Rick Warren is using the name of Jesus in his prayer at President elect Barack Obamas inauguration. There are some that think Rick Warren should be told not to use the name of Jesus. It might offend someone. Now before we go down this road of "how to do this fair", let me cut to the chase. Nobody gets to pray. In the end if a Buddist monk or an Islamic cleric were to pray and call upon their god, someone will get offended. So nobody gets to pray.

Years ago I was faced with the same dilemma. I was asked to pray at a Chamber of Commerce breakfast. Right before I prayed someone whom I didn't know walked up to me and asked if I was going to pray a nonsectarian prayer? I said that I was going to pray the only way I knew how to pray. The person was shocked at my answer and walked away. I then turned to the President of the Chamber and asked her what her preference was. I was willing to bow out graciously if need be. Her response was, "These people need Jesus now more than ever - pray for them!" So I did and no one ever asked me the nonsectarian question ever again. In fact I had a long and wonderful relationship with the Chamber from that time on.

According to the article it isn't other religions that are complaining. It is the gay rights activists who are upset because Warren supported Proposition 8 in California. (It was passed and it banned same-sex marriages.) In other words, it is all about politics.

Jesus is above politics, governments, religion and our opinions. In fact He said that He would offend a lot of people - and He does. Regardless of ones opinion Jesus is still the Messiah, the Savior of this world, the Son of God and our High Priest. That statement alone offends some - but it is what I believe. And I am not alone. This is a country who is still predominately Christian even though our culture no longer is. If we abandon Jesus we abandon all hope. While there are those who think this is the PC thing to do - it isn't the right thing to do.

What is the right thing to do?
- Pray for President elect Obama
- Pray for Rick Warren
- Pray for the gay rights activists
- Pray for our country
- Pray for your leaders and those in authority over you
- and whatever you do - Pray in Jesus name!
Current Events