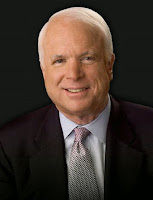 Politics and religion use to go to together very well. Ask our founding fathers, Abraham Lincoln and others. It hasn't been until the last 30 years or so that the two have been more annoyed with each other than helpful. Watching Sen. Obama reject his personal pastors endorsement and now Sen. McCains rejection of Parsley and Hagee is very disturbing. Let's clear up a few things.

Whether you agree or disagree with Rev. Wright's theology (personally I disagree) we live in a country where you have the right of free speech. Because Rev. Wright is the personal pastor of Sen. Obama his theology is important to voters. A pastor is a leader, shepherd an influencer of those whom God has charged them with.

Parsley's comments about Islam being an "anti-Christ" religion isn't off the mark. Any good theologian will tell you that the Old Roman Empire spoke of in Revelation isn't governmental but religious. Hagee's comments about Hitler isn't off, even though personally I don't think I would have said it that way. First of all the Bible says that all authority comes from God. Yes, even Hitler. The comment that God used Hitler to drive the Jews back to the promise land comes from history. We have seen how Jewish persecution has always driven Jews home to Israel. His comments about the Catholic church, isn't off the mark either. Hagee said yesterday that he was only addressing the darkest chapters of Catholic and Protestant history with the Jews. Yes, we have some dark history people, but's that why we call it the Dark Ages. FYI - Hagee pulled his endorsement of McCain yesterday.

Regardless of your theology or opinion the message is clear. Political leaders do not want to have guidelines of morality placed upon them from a higher standard, such as the Bible. They will police themselves and do as they please. Religion of any kind no longer has a voice in this country. It isn't that it has been rejected, it's worse than that. We have been made irrelevant. Soon what we say in the pulpit will no longer be protected as free speech. Ask any Canadian pastor, it's already happened to them.
Election 2008