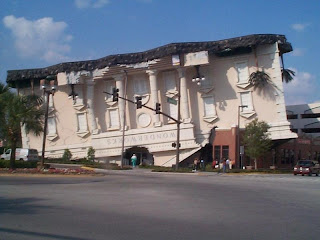 I like roller coasters, as long as they are in a theme park and there is a start and finish to them. Have you ever rode one over and over and over again? You will get sick and nauseous after a while. Well, I have had one of those weeks and now I am sitting at my desk with a bottle of Tums.

There were some great highs! All the District Business went very, very well! Elections went smoothly! We raised 2.9 million dollars in cash and pledges for churches in India. 3 ministers from my section (West Palm Beach area) were ordained. I got to pray for James Iskra from Sebastian. I am one of the faculty for our new District School of Ministry starting this fall. I will be teaching Synoptic Gospels this April. (FYI- DSOM, as it is called, is for anyone who seeking credentials with the Assemblies of God or if you just want to take one class for personal edification - more info. to come.) I got to meet some of our missionaries who just came off the field and I got to say goodbye to some of my friends whom I will not see again for another 3 or 4 years.

There were some lows. The hotel (see blog below) I learned never to eat greasy food after midnight. (Still suffering from that one.) My daughter found a boyfriend. (He's 4 years old and lives in Lakeland.) That broke the heart of a 3 year old boy who lives in Lake Wales. My lowest point was learning about a fellow minister who had sinned. It broke my heart as it did many others.

We decided to take Thursday and spend some time together as a family. One night, as we were driving to a restaurant, we drove by Wonder Works (pic above). All of us had seen it before so there was no comment, except for the one from the back seat. Anneka had never noticed it and all I could hear was, "Dad! That building is messed up!" So we took her to the "messed up" building and she had a blast! Then we went to the Disney Market Place. Anneka and I had visited earlier this year so she became a wonderful tour guide for mom. Then we came home, exhausted and spent. We all slept well.
Personal Life